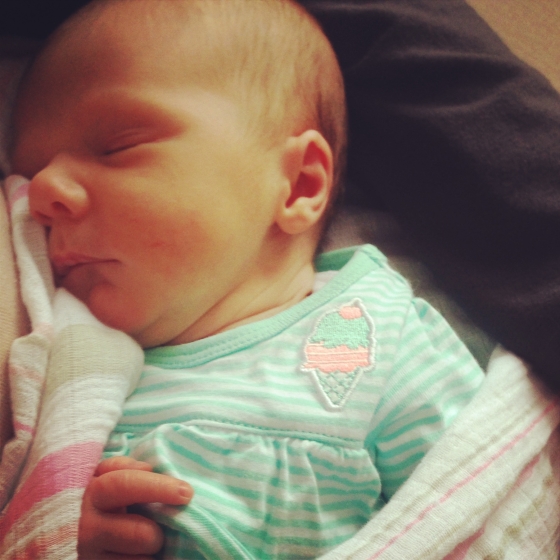 Tomorrow will be two weeks since my niece, Avery Jo, was born.  I started to write the story of her birth on the plane ride to Cleveland but I decided that it might be better to get it down in cyberspace—after all, the internets are forever.

From the time my sister found out she was pregnant, I’ve been telling everyone with ears how excited I am about being an auntie.  About a week before the birth, my sister emailed the family their birth plan.  My portion of the birth plan was hard to actually plan for.  The plan was this: my sister wanted to labor as long as possible at home before going to the hospital, so she’d text me when she knew she was in labor.  Hopefully she’d labor long enough for me to get on a plane and get to Cleveland so I could be at the hospital.  It made me really uncomfortable cause this plan hinged on the baby being ready—so she could be on time, early or late… the whole month of February belonged to my sister and the baby.

After a fitful night of sleep on February 4th, I awoke to a text around 5:15 am:

“You may want to pack a bag, and look at flights.”

Rachel had been having contractions since midnight.

Six hours later, I had a bag packed and was on a flight to Cleveland.  The weather in Des Moines had other plans… we sat on the runway for an extra 30 minutes while the plane was being de-iced.  I had foolishly booked my connecting flight through Chicago O’Hare which I’ve had mixed luck with in the past.  I joked pre-labor about Home Alone-ing it through O’Hare (you guys know, when they overslept and had to sprint through the airport) and all kidding aside, that’s exactly what I had to do.  The 30 minute delay made me miss loading on my connection so I ran through the airport, suitcase behind me.  The gate agent had to open the closed door for me to get on the plane.  I’m so lucky I made it because there was a snowstorm already happening in Des Moines and it was headed to Chicago.  I don’t know if I’d have been able to get another flight if I had missed my connection.

I pulled into Rachel and Adam’s driveway just as they were loading up to go to the hospital.  My mom told me later that Rachel waited for me.  She was 8 cm dilated when we got to the hospital but there was still a long night ahead of us.  This is the part where I have to stop and tell you that my sister was a warrior.  Their birth plan included no “drugs” of any kind, no constant monitoring, and the ability to get up and move around if she wanted to.  She had the birth she wanted and she was incredible.  The whole experience was so special because there was nothing but love in the room.  Rachel was kind, patient, even apologetic at times but most of all she was herself.  She pushed for three hours and never once said she wanted to give up.  She was ready to meet their little girl and she worked hard.

Avery was born at 2 am on February 5th in the middle of a snowstorm to two of the most loving people I’ll ever know.  She made a quiet entrance and had quite the little cone-head.  I know I’m a little biased but she is perfect.  The whole experience, from that first text to seeing Avery’s little body flopped up on my sister’s chest, was so far beyond anything I could have expected.  I never understood the magic of birth and babies but I do now.  There’s nothing I wouldn’t do for her; I love her more than I thought I could and all that happened in one breath. 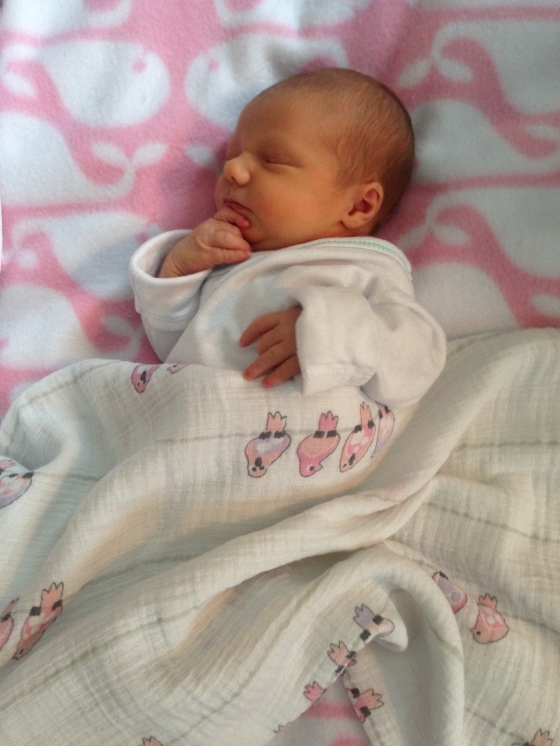 I stayed for a week.  My mom, sister, brother in law, Avery and I were all holed up in the house together for the first time in ever.  We cooked together, ate together, laughed together and made some new memories as a family.  I got to see my mom as a grandma and my dad as a grandpa (his teary eyed response to holding her was beautiful).  I stayed up with Avery at night so my sister could get rest.  I changed diapers and helped during feeding times.  I sucked in as much of that little girl as I could before I had to leave.  My emotions are still very raw even two weeks later.  I’ve never cried leaving Cleveland but I did when I left them.

I couldn’t really be told what this would mean to me, like all good things in life.  I had expectations but it was nothing short of the biggest moment I’ve been a part of.  More than anything, I feel overwhelmed by the hope and excitement that comes with new life.  It took 9 months and an instant.

One thought on “avery.”